Kyath Battie : Next to Nothing 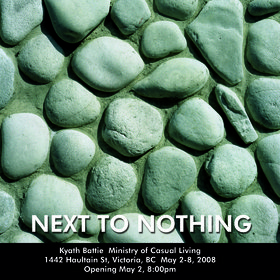 For years, Langford has been a working class town, a place of pawn shops, big trucks and dense Douglas Fir Forests. Centred between the base of Malahat Mountain and the edge of the Trans Canada Highway - a place close to expansive mountainous rocks and trees, but away from anything considered important, valuable, or even reasonable - Langford has long been perceived as something 'next to nothing.'

One 60 in x 60 in backlit photograph will be installed directly into the gallery window. The large format transparency will be lit 24 hours and transform the gallery into a glowing light box. The image taken is from the top of Future Shop looking down onto Millstream Rd. The angular metallic sci-fi rooftop is reflected by the puffy clouds; future meets nature (which is strangely hopeful) and in between is our present captured in miniature, a sprawling disconnected village. Somewhere in the background are the Douglas Firs, filler for the portrait, on the periphery.

Next to Nothing is part of an ongoing photo/video series centred around and about Langford.
Presented by: The Ministry of Casual Living
add photos
© 2022 Kyath Battie : Next to Nothing: @ - May 02, 2008 Victoria, BC