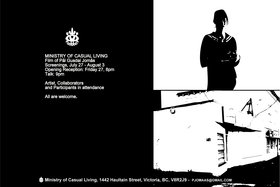 Artist, Collaborators and Participants in Attendance.

My film was created together with young adults in Victoria who were willing to be interviewed for this project. The participants in the film are elaborating about their personal ideas of self projection. The film aims to question the portrayal of young adults in response to the idea of the explained person, as something everyone has to answer for. All interviews were unrehearsed and are a response to the created situation and their own grabbed words and will to explain. Identity and who controls it or directs it is the major theme in this film.

The film was only made possible with the engagement of all participants and Jay Morrit.

I am a Norwegian artist, that has been living in Winnipeg, Canada for the past year. I am formally educated from Bergen National Academy of the Arts. My major working themes include exploring an interview style video that combines the classic technical style of photographic still portraiture with contemporary video. Video-portraits are what enables me to question and evoke personal topics about concepts that are important to the (voluntary) participants I involve.

I wish to thank the City of Bergen, The Royal Norwegian Embassy in Ottawa and Martha Street Studio in Winnipeg for the (continuing) support in my artistic practice.