Alison MacTaggart : You and I 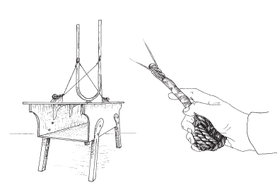 The Tuning-Fork-Like Apparatus and its embodiments in Prototype A and Prototype B were developed to solve a particular conundrum: How does one build an object that enables a person to talk back to another; and an object, that in doing so, calls attention to both persons and the effects of their words?

The conundrum in question arises from the permeating residue of real world encounters in which individuals are subjected to other people's utterances. Thus, in the real world, an invention that provides a resolution to said conundrum has many practical applications.

Prototype A and Prototype B are the fruit of two years of rigorous research and effort to devise satisfactory working examples of the proposed invention. The exhibition and presentation of Prototype B represents one potential resolution to the conundrum, which further promises features and benefits that exceed its origins.

The artist gratefully acknowledges the support of the BC Arts Council.
Presented by: The Ministry of Casual Living
add photos
© 2022 Alison MacTaggart : You and I: @ - Nov 14, 2008 Victoria, BC