My name is scot & leannej : Your Next 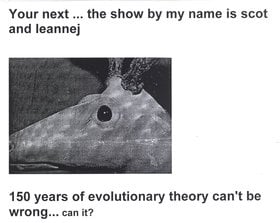 Fri. September 10th 2004 - Thu. September 16th 2004
@  1442 Haultain Street
It's a show about the end of the world, well, sort of, and all you have to do is show up! Join my name is scot and leannej at the Ministry for Casual Living on September 10th at 8pm to find those missing links between opening nights, creative heights and human rights. It may not be too late to change the way you think or reconfigure the design of your life, but its probably too late to save this massive planet. Oh well, come out anyways and celebrate your responsibility for the way things are. Encounter a series of significant texts, modified waste products and un-natural objects. It's your future. Go on, impact yourself, immerse yourself in the critical mystery of this thought provoking installation. Your next is on view from September 10th to September 16th and then its over.

leannej is a critical thinker, writer and one of the editors of FRONT Magazine - who also has visions. "Save the world", she responds "I'm just worried about saving my arms."

my name is scot designs installations, texts and performs globally. "I knew it would turn out this way", he says.
Presented by: The Ministry of Casual Living
add photos
© 2022 My name is scot & leannej : Your Next: @ 1442 Haultain Street - Sep 10, 2004 Victoria, BC