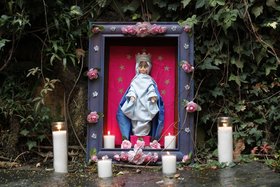 Fri. July 5th 2013 - Fri. July 19th 2013
@
I admire and respect the various forms and styles of visual expressions of devotion and wanted to honor the passion and beauty I've seen in shrines from around the world. Different religions, different beliefs, different regions and all the different reasons for making a reminder inspired me to make a few shrines of my own.
I chose to mix a popular religious icon and home music entertainment equipment and used found objects, fabric, acrylics and spraypaint to do it.
I guess you could say Music and Art are my "Religion" , and holy shit do i hope you enjoy my shrines expressing just that.