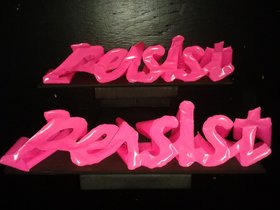 Sun. December 1st 2013 - Tue. December 31st 2013
@  The Ministry of Casual Living Decade window 1407 Government st.
'persist' is an on-going project committed to constructing new objects from the remnants of an inflatable, vinyl plastic air mattress. The twice constructed word "persist", as well as an ever-growing pile of fir cones addresses a state of insistence; a stubbornness that can be interpreted in a negative sense while at the same time implying a sense of optimism.