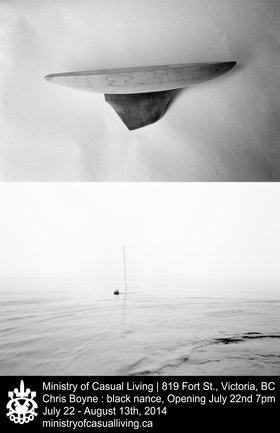 Fri. July 18th 2014 - Tue. August 12th 2014
@  819 Fort St. (All Ages)
black nance is a project based in history and story. For the project, I made a traditional pond boat with a hull shaped of wood, a heavy metal keel and functional rigging that allows the model to sail autonomously. Black Nance was the name of the first Tancook Schooner built by Amos Stevens of Tancook, Nova Scotia. The model I built is based loosely on that boat. The hull was shaped with similar lines as the original but the style of rigging and shape of the keel are different. The black nance I built does not attempt to faithfully replicate the original but the two boats do exist in the same place—the original was the first of its kind and, within my practice, mine is as well.

As children, my brother Andrew and I played with toy wooden boats our father made for us. There was a tugboat with a stubby smoke stack, a freighter with cargo hatches, a shapely ocean liner with portholes down the sides of its hull and others. These boats referenced my father’s love of the working harbour and a knowledge of hull lines and proportions gained from that love. They were sensible models with an accuracy and plainness that led to great form.

Donald Gass, my boyhood friend, built miniature moorings for his own toy boats. He set them up in the river behind his winter cottage. With cord, bricks and fishing floats he showed me how. The fast moving current pulled the boats in line and tight against their moorings and water would rush past their hulls sending a mess of white and fizz down the river. Donald’s Atlantic Breeze was lost in that river when it broke from its mooring. His dad had made that boat too—Donald painted it every year.

When the black nance was complete I traveled with it to Nova Scotia where it was launched in the ocean at the tip of the Aspotogan Peninsula. Using a heavy piece of cast steel as an anchor and a cork ball as a float I made a small mooring for the boat. The black nance stayed at its mooring for a time existing in a quiet moment of non-use without sails and with rigging lashed tight. The little boat pitched and rolled with the small waves and currents of saltwater ocean.

Chris Boyne (b. 1984. Halifax, Nova Scotia) is a photo-based artist who uses found ideas, memory and fiction to create work with manifold complexities. His work has been shown across Canada and in the United States. He is currently based in Montreal and Halifax. http://www.chrisboyne.com
Presented by: The Ministry of Casual Living
add photos
© 2022 Chris Boyne, black nance @ 819 Fort St. - Jul 18, 2014 Victoria BC