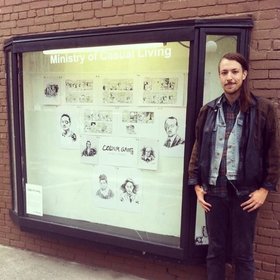 Fri. August 15th 2014 - Fri. August 29th 2014
@  Odeon Alley
All Day> All Night> All The Time
Mal and Zombi is an adventure comic about a young girl in Louisianan nature. The comic, created in classic 4-panel strip style, is intended as a primer for a longer story in the tradition of albums by French/Franco-Belgian artists (e.g. Hergé, Moebius, Blutch, Christophe Blain). The exhibit also displays portraits of writers and musicians whose work influenced the comic, as analogous as Maya Angelou and James Booker, and disparate as Igor Stravinsky and Nick Cave. The aim of the exhibit is primarily to tell a story which is enjoyable for all ages; and further, to promote diversity in comics in terms of subjects, readership, and creators, in part by using the exhibit as publicity for low-tuition, alternative comics education.

Alain Champagne is a French-Canadian cartoonist, musician, writer, and educator. His interests include motorcycles, fermentation, espresso, and all things DIY. He is a founder and teacher at the Colour Gang Comics School, a volunteer-run, low-tuition school entering its second year. For more information, visit http://www.colourgangcomics.com
Presented by: The Ministry of Casual Living
add photos
© 2022 Alain Champagne : Mal and Zombi: @ Odeon Alley - Aug 15, 2014 Victoria, BC