Laura Dutton : Quietly at the Window 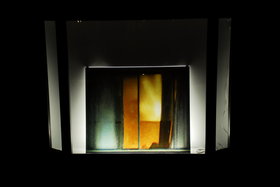 Fri. July 3rd 2015 - Fri. July 17th 2015
@  Odeon Alley
ALL DAY > ALL NIGHT > ALL THE TIME
Windows are holes. We understand them first and foremost as an absence in some larger surface or structure. They connect spaces and transform them into images, which are projected onto the hypothetical plane that exists within the borders of the ever-present frame. By necessity, we conceptualize the window in relation to what lies beyond.
In her body of work, Quietly at the Window, Laura Dutton takes this ontological absence and gives it physical presence. What was once defined by its transparency—both visual and conceptual—is now opaque. The viewer is confronted not by the emptiness of the frame, but by the incredible density of colour and form contained therein. In this series, the beyond has revealed itself as neither fantasy nor reality, but pure abstract reverie.
The window remains, despite the paradoxical inversion of its very nature, but our collective uncertainty about the origin of the subject—its lost referent—and the deconstruction of the photographic process itself distance the work from traditional values; we don’t approach these structures as windows… or any other form of representation. Instead, we are introduced to a phenomenological language that is far more common in the world of painting or sculpture. Dutton’s luminous skeletons rely not on the internal logic of their composition, but on the seductive power of their emanations, which can rightfully be described as the product of Rothko and Flavin combined.
- text by Matt Trahan http://www.lauradutton.com
Presented by: The Ministry of Casual Living
add photos
© 2022 Laura Dutton : Quietly at the Window: @ Odeon Alley - Jul 03, 2015 Victoria, BC