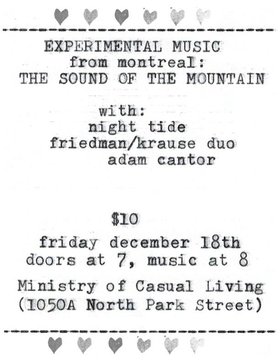 The Sound of the Mountain is Elizabeth Millar and Craig Pedersen. Playing amplified clarinet and trumpet, they fill rooms with sounds of breath, wind, wood and metal, creating an intimate noise. They perform long pieces often spanning 30-40 minutes, which take their audience through a rich and rewarding sound experience. They are recently returned from concerts in Australia and South-East Asia and are currently working on their first recording to be released in early 2016.

Elizabeth Millar is currently studying a music performance major in Fine Arts at Concordia University with world-renowned contemporary and improvising clarinettist Lori Freedman. Elizabeth is an active improviser in Montreal and has performed across Canada and internationally in Australia and South-East Asia. She continues to develop an innovative and unorthodox approach to her instrument and to her performance art practice.

Nathan Friedman is a clarinetist and composer currently based in Victoria, BC. He studied composition and experimental music at Wesleyan University and UVic and has improvised with Anthony Braxton, Gino Robair, François Houle, Joëlle Léandre, Mats Gustafsson, Nicole Mitchell, Wayne Horvitz and Taylor Ho Bynum. He is currently a member of the Victoria Composers Collective, the Friedman/Krause Duo, A Place to Listen Ensemble and The Swinging Pendulums.

Shane Krause is an improvising baritone saxophonist and clarinetist (Eb, Bb, and Bass Clarinets). Shane’s focus is on improvised music but he also has a performs music from the jazz and classical spectrums, including jazz, free jazz, chamber music, new music and common practice classical music.

A special message from General Gruff

Improvisation is misnomer. The very best improvisational work you will ever hear comes from a foregrounding in relentless practice, experimentation, and more often than not a basis in deeply structural musical forms. All of that rehearsal for the moment of sublime creation allows musicians to appear as though they are pulling something miraculous up out of nowhere. Behind every miracle is a deep science. This what my teacher, Shambhu Das always told me about Hindustani Classical Music. I studied the theory and practice of it with him for 20 years. It is music of boundless invention, founded in the most complicated science music has to offer.

Besides the sitar, I spent my childhood and youth at a music school, studying Western musical theory, composition, studying/playing jazz music, touring. I went through that whole conservatory thing. I played guitar in a death metal band. Later on I got interested in the traditional music of the Appalachians and I learned to play banjo (fairly well) and fiddle (not so very well, yet). I play in oldtime bands and I go to festivals. I also have had a long held interest in electronic music, and noise music, and I have put out a few albums, and fried a few speakers. I've built my own bizarre instruments.