Audie Murray : Can I Squish Your Face? 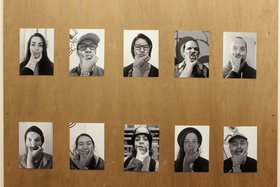 Can I Squish Your Face? is a collection of photographs captured on an Iphone 4s by Audie M. It includes one hundred individual 8x6 prints of subject having their faces physically squished by the photographer. The photos are presented in black and white, installed in a grid fashion. The hand of the artist is literally visible in each photo to allow the investigation of notions linked to connectivity between two subjects, in this case the photographer and focus of the photo.
One aspect of photography that I am attach with is the idea of being able to study a person for longer intervals than would be obtainable in real time. To take this notion further I thought it would be interesting to physically mold or skew a subject’s face into a form that is not usually viewable for longer than an extremely brief period. In order to squish the subjects face I needed to physically connect with them, which allowed me to work with concepts that centered on the idea of connectivity. This led me to thinking about connecting with other people in general and all of the implications and different paths casual encounter of connecting could generate such as the idea of consent through connectivity, levels of comfort through connection, and what enables and disables two people to explore connections. The parameter of only taking photos of people I was interacting with was put into place so that I was able to delve into a deeper sense of understanding between the relations of two subjects.
Can I Squish Your Face? is a humorous photo set at the surface but alludes to deeper reflection about connection through the physical presence of the photographers hand but also through the use of black and white photography. The implications of black and white photography often refer to feelings of importance and understanding which allows the viewer to look beyond the humour.

Audie M. is an emerging artist originally from the prairies and currently living on Vancouver Island. She explores many mediums but prefers to work with media arts, and installation. Within her practice she delves into themes such as connection, culture, and the merging of traditional and contemporary art. Currently she is in her second year of the Visual Arts program at Camosun College and has been a part of many creative projects such as PVX (Pacific Voices X-change) and IYAP (Indigenous Youth Arts Program). She has had the opportunity to showcase during the One Wave Festival as well as to collaborate with local muralists, creating a mural on the back of the Vancouver Island School of Art, as well as inside the women's center at the University of Victoria.
Presented by: The Ministry of Casual Living
add photos
© 2022 Audie Murray : Can I Squish Your Face?: @ 1056A North Park St - Dec 30, 2015 Victoria, BC