Alysha Farling : The City of Innard 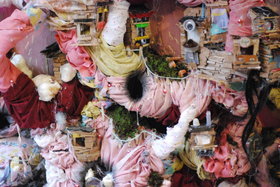 A miniature world inspired by the first world/home we inhabit, our bodies.

I was born and raised in Victoria BC. I received my art diploma from Camosun College in 2008 and then went on to Concordia University where I received my BFA in 2013, where I majored in drawing. Since graduating I have been in multiple exhibitions in Montreal, Ottawa, Victoria and Argentina. I've had three solo shows and have done two residencies, the most recent being at Camosun College this past fall. This coming year I have a curated book of my sketchbooks being printed through PDA press and an exhibition in Vancouver at 'Untitled' space that will be both collaborative between artists and the public in late October.