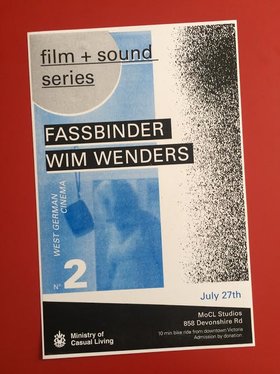 Join us for a screening of RAINER WERNER FASSBINDER'S feature film, FOX AND HIS FRIENDS (1975), along with a selection of early short films by WIM WENDERS. W/ live synth-driven electronica by VOID MIRROR (https://soundcloud.com/voidmirror).

The second in a series of monthly open air film + music nights featuring avant-garde and experimental works by celebrated international directors, surprising local shorts from the archives and live sound from local musicians and DJs ... Artistically ambitious, socially critical, reacting to cultural and economic stagnation in the 60s; New German Cinema is born. Focusing on work from two of West Germany's most recognized directors, whose work still resonates today.

“Unlike the Nouvelle Vague, we never thought or hoped or meant to ‘improve’ the industry, to join it, or even to replace it: we saw our activity as an alternative to it. No models, no tradition, no one whose place we wanted to usurp. The Filmverlag was a kind of co-operative for us. There was unusual solidarity among us – the only capital we had.”

This event is curated by Jameel Mulani, Emma Holland and Aimée van Drimmelen. Refreshments & snacks available (cash only). 10 mins by bike from downtown Victoria. Thanks to the Victoria CRD, MediaNet and CineVic for their support

The Ministry of Casual Living (MoCL) is a registered non-profit society and a member of the Pacific Association of Artist-Run Centres, exhibiting the works of contemporary emerging and mid-career artists since March 2002. Established to provide artists from all disciplines with an accessible venue for experimentation, MoCL is committed to promoting critical, self-reflective discourse, and integrating the artistic process into all aspects of everyday life.

We are located on Unceded Coast Salish Territories (Victoria, BC Canada). We operate studios at 858 Devonshire Road, in the Esquimalt Industrial Park, a window gallery generously donated by Cenote Restaurant in the Odeon Alley, and the PedalBox/PaddleBox mobile Bike Cart Galleries.

Aimée van Drimmelen is an interdisciplinary artist exploring the rhythms of nature internally and externally over a variety of media including 2D paintings on drumskins, film/video/animation, and sound. She was co-curator of Montreal's Reel Dames film festival, and selected for the NFB Hothouse animation mentorship program in 2011. Since then her animated shorts and music videos have screened at numerous festivals including Fantasia and the Vancouver Asian Film Festival, and won an AI-AP Motion Arts Award. She is currently based on Vancouver Island. http://avd-art.com
add photos
© 2022 FILM + SOUND Series No. 2 : West German Cinema: @ The Ministry of Casual Living - Jul 27, 2018 Victoria BC