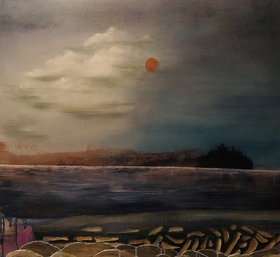 Fri. July 19th 2019 - Fri. August 9th 2019
@  Ministry of Casual Living Window Gallery Free (All Ages)
Following a stretch abroad lasting nearly a decade, Skye took up painting to connect with the island where she was born. Through painting she is increasing her visual literacy and aesthetic intuition by looking carefully at the world and presenting her interpreted absorption visually. To combat an occupation with a frantic and fleeting imagery existing only on her smart phone screen, Skye is looking outward and examining the sentiments which the natural world arouses inwardly. Skye’s work asserts against the tendency to wash over what we see; modern societal behaviour adopted due to optic bombardment of pictures presented through media outlets.
The landscapes portrayed are inspired by her interactions with and reactions to her natural surroundings, interrupted by the agitations and sensations presented by a modern world teeming with sensory overload. As an emerging artist, Skye works from a professional studio space in Chemainus BC, experimenting with views inspired by lush west coast vistas, and the emotions evoked by the complexity of nature. Her work is an attempt to reconnect with the land while disconnecting electronically. The perspectives of the paintings range from sweeping panoramas to dramatic microscopic depictions.
Blood Moon
The exploitation of the natural phenomenon of the blood moon is presented through stained raw canvas and tactful brushstrokes juxtaposed with high viscosity paint pushed onto the foreground. The result is a landscape painting with a brash abstracted slant. Landscape painting butted against abstract elements strives to create curiosity within the work. The representative night sky view is interrupted with a blunt band of texture begging for prolonged viewing. This intentional break within the serene panorama is an attempt to hold the attention of the viewer and is in response to the quickness in which visual data is digested in modern society.
Brushwork
This ‘landscape’ painting presents the movement of a small lizard crawling through an ivy vine on the hedgerow in the front garden. Imagination, inner vision and unabashed enthusiasm drove the creation of this painting depicting the shapes and movement between the overgrown flora and the organisms that reside there. This extremely up-close slice of nature captures activity of the microcosmos. Organic shapes and flat gradation contrast with chiaroscuro effects to portray the intricacies of the microcosm; the finer details of the active natural world. The bold colour combinations and alterations between thick and thin line intersected with dark splotches, and a careful earth tone scrape draw the viewer into a world typically walked over. The painting moves from a rendition of what is obviously physically presented to one that interprets the vast and composite natural biosphere. The intention stands, which is to grasp the viewer, encourage optical investigation and extended consideration that leads to a personalised response, or recollection of ‘that time when’.
add photos
© 2022 South of Cedar Keep: Skye Alexandra Skagfeld @ Ministry of Casual Living Window Gallery - Jul 19, 2019 Victoria BC