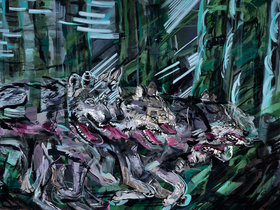 Fri. August 30th 2019 - Fri. September 20th 2019
@  Ministry of Casual Living Window Gallery Free (All Ages)
Mitchell Villa's process follows movement, while his brush stroke reflects his subjects in motion. Villa works in layers, applying, reapplying, and distorting. Sections of the canvas seem like spliced film frames, while others imply motion blur, collage, trace-lines, smudge, and saturation among their emotive effects. Villa challenges the single moment usually reflected in a two dimensional composition. His figures seem to move through time and out from the frame. Their energy is amplified by his large scale and bold colours, which draw the viewer inside. One can stand well under the top of the frame, and pace from one side to the other, following the movement and its sense of rhythm, as one would with music or dance.
add photos
© 2022 Wolves: Mitchell Villa @ Ministry of Casual Living Window Gallery - Aug 30, 2019 Victoria BC