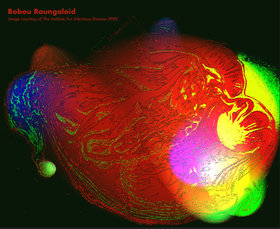 Sat. March 14th 2020
@  The Ministry of Casual Living Free (All Ages)
7pm - 11pm
*We have decided to postpone this event until a future date. Please stay tuned!*

An installation consisting of drawings, text, sound and video that will be accompanied by a short presentation of possible facts and performative speculations... w/ DJ Mud (Katayoon)

"The Bobou Raungaloid parasite (pictured here in a computer-generated image) is a parasitic fungus that originated in rats and mice but is increasingly found in human hosts. Researchers at The Institute for Infectious Disease have begun looking into the effects of this seemingly benign parasite that is now thought to inhabit upwards of ten percent of the human population. Some researchers claim that this parasite may actually have an effect on behaviour in humans. While it is still too early to draw any definitive conclusions, early experiments indicate that test subjects exhibit a common symptom that causes general temporal confusion, and more than half of test subjects experience a recurring sensation as though they just recently had a profound idea or revelation but can't quite remember it. These symptoms are widely reported across different experiments but are still unconfirmed.”

The effect of parasites on human behaviour is still to be determined, but that won’t stop me from speculating that it’s probably full control. The parasite mentioned above is a multi-dimensional organism which can make its detection in human hosts very difficult. For example, the size of the parasite’s body that is visible to us in three dimensions is roughly 0.0002 percent of its total mass, while the rest of its body extends into the fourth and some even into the fifth dimension (the Bobou Raungaloid has two retractable cilia for lateral temporal motion into the fifth dimension). Thus, the vast majority of this parasitic fungus’ body is invisible to us, though its effects may be enough to turn infected host’s personal memories into fictions and transform relaxing moments of leisure into stressful missed opportunities.

Dave Biddle is an interdisciplinary artist and researcher based out of Vancouver BC, where he teaches at SFU’s School for Contemporary Arts. With an interest in parasitic modes of transformation Dave uses text, video, sound, and performance to bring aspects of other universes into this one.

Quoting G Spencer Brown - “A universe comes into being when a space is severed or taken apart. The skin of a living organism cuts off an outside from an inside”.

But Dave would respond by saying that nothing is ever truly cut off; The membrane that forms a boundary is always engaged in regulatory exchanges, letting bits of outside in and bits of inside out, eventually giving rise to Inter-Universal Novelty (IUN)*

*Inter-Universal Novelty (IUN) is widely regarded as the most fundamental form of creativity and is thus considered by specialists to be the ultimate form of art making
add photos
© 2022 The Bobou Raungaloid parasite: Dave Biddle @ The Ministry of Casual Living - Mar 14, 2020 Victoria BC