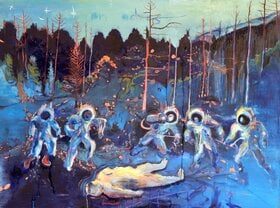 Mon. August 30th 2021 - Sat. September 18th 2021
@  Ministry of Casual Living Window Gallery Free (All Ages)
Lukas Mouka is a Czech-Canadian painter currently based in Campbell River, British Columbia. Over his career a unique style has evolved to incorporate diverse influences from a range of disciplines, cultures, geographies and eras into a single voice. With work that frequently situates the human figure in landscapes that are as familiar as they are alien and surreal, his work bears inflections of early 20th century modern artists, but in new and unexpected contexts that blur the division between subconscious and conscious experience. His inspiration draws as heavily from the landscape and nature as it does from philosophy, religion and modernity, to create a form which is equally psychological as it is primordial.

Mouka’s paintings are generally formed from composite images using various source materials as well as pure imagination and spontaneous inspiration. He uses images to express their inner realities, always attempting to make objective, subjective sensations and experiences. A continuing thread is the exploration of shifting and changing subject matter arising from the challenges of depicting life using a “static” medium. Other themes include the inherent alienation from living in an increasingly technological age, and the material consumerism growing out of the need to fill the void. He also feels the need to explore more esoteric ideas of non- duality and the interconnectedness of all life including even inanimate matter which is essentially composed of conscious energy. In his work he stresses the importance of the treatment of the subject as much as the subject itself with the aim of uncovering deeper realities within his subjects by presenting their “super reality”.
add photos
© 2021 Just an Address: Lukas Mouka @ Ministry of Casual Living Window Gallery - Aug 30, 2021 Victoria BC