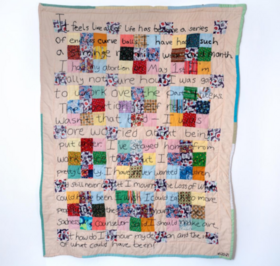 In a May of the 2010s, I had an abortion. It was an easy decision in many ways, as I simply did not want a child, and therefore made the right choice for me. In other ways, it was one of the toughest decisions of my life. Even though I did not consider the embryo to be a life, it was the closest potential to life that I had ever come. Even now, I still mourn and hold guilt for what could have been, and hold shame as though the abortion is a secret I need to keep to myself.

A few months after the abortion, I started to journal more as an outlet for the flood of overwhelming emotions. Later on, I decided to make an artwork to reflect on my experiences. The results took over a year and half to create Abortion is Normal, an embroidered post-procedure diary entry onto a hand-made baby quilt.

Although abortions are very common, they are not a thing that is disclosed often. I personally only have had one person who has ever disclosed to me that they had one. At the time of my abortion, I only told two people, and did not share with many people out of shame. Abortion is Normal attempts to assure others that abortions are normal, and with them, the procedure can also bring up complicated and uncertain feelings. Many Canadians look on in horror with the possible overturning of Roe vs. Wade in the United States. However, ever since complete legalization of abortions in Canada in 1988, it has actually been getting harder and harder to have one, particularly if you live outside of a big urban area or in the Maritimes.