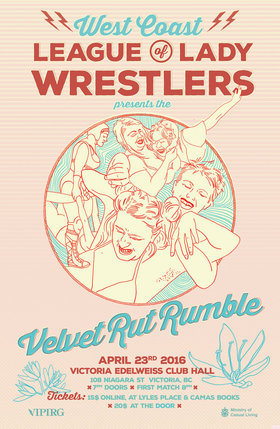 Join us in celebrating the first-ever League Of Lady Wrestlers rumble on these western shores!

BLACK WIDOW ~ Emerging from the dark, dank and feared corners of intricately woven independence, this shapeshifter has been hailed both Demon and Goddess throughout history. Scrutinized for her hungry goals, her emotional autonomy and sexual cannibalism, legend has named her Jorōgumo, Arachne, a Spinnetod, and many others. Tired of the stories that have fetishized her power, Black Widow emerges in her true form to weave a new herstorical saga. Be weary of her sneaky spidey-senses, subtle moves and crafty agility, for this wild witch isn't on the hunt; she waits.

QUAGGA MUSCLES ~ A close relative of the Zebra Mussel, Quagga is an invasive species that hails from the black sea. She has infested waters far and wide with her parasitic privilege. The strength of her stronghold has been known to choke all forms of life out an entire aquatic ecosystems. Her razor sharp shell can slice through even the fanciest gum boot. Her wretched Siren song induces paralytic seizures in her cursed opponents.

HAGATHA CRISPY ~ mystery novelist and editor by day, gentrification fighter by night! She lives alone in an old mansion on the water. Her elderly neighbors have all passed away and their children have sold the land to an evil developer for it’s increasing high value. But Agatha knows she’ll be alive for a while yet and fully intends to stay put. Agatha knows of a brewing plan to replace her home and the quaint seaside land, filled with trees and their wild inhabitants, in favour of a large luxury condo development on land stripped of it’s native flora and fauna.

JEAN SPAWNDA ~ Hailing from the deepest aquatic caves of the ninth planet, this slime sucking, collarbone crushing alien badass is here on earth for one reason: TOTAL DOMINATION. Her unearthly band of female warriors, the CLITERATTI have a lust for impregnating their enemies with their signature oozing slime. Don't let her get you in a hold or you'll find yourself waking up to a bellyful of extraterrestrial spawn.

INNA DEMON ~ Years can pass between sightings, and just when you begin to doubt their existence, this malevolent being will appear seemingly out of nowhere, and will drag you down. They are known for their vicious cycles of self loathing and social anxiety, masked by an exterior of binge drinking, reckless behavior and loud living - often with an unapologetic, angry demeanor. When your life is trash they will be there.

STEEL KEGAL ~ a master of discipline, having spent her whole fighting career guarding her most prized weapon: her virginity. Painstakingly preventing her precious flower from being sullied has allowed her to amass an incredible amount of pent-up energy that she unleashes at a moments notice on whoever dares cross her. Her signature move, the hymen maneuver, looks much like a reach-around grab but she insists that "its all in the hymen". Opponents have long tried to pop her cherry (which looks very much like a red helium balloon that she carries with her) with the hope that this will allow her to chill out already, thereby sapping her power.

ANNACONDO ~ Slithered out of the womb half woman, half snake and all business, this omnibreed is a self-made, set for life real estate mogul. She wrestles to pacify her insatiable predatory nature and when she can, for deeds. This duplicitous, walking, kicking snake-woman constricts the power from her opponents just as she strangles the affordability out of working class neighborhoods. She has no qualms with displacing people, or body their parts.

URSA MAJOR ~ Hailing from the celestial heavens of the northern 'sphere this mama bear is anything but an angel. Drawing strength sevenfold from her asterism stars, this brash bear will dip & rip more fiercely than a thicket of Devil's Club. Roaming the western skies, Ursa seeks to maul trophy hunting males who celebrate their kill of fierce grizzly women. She's been healing during a long winter hibernation; now awake and ready for murderous rancor on the dude-bros who colonize the landscape and rape for their trophy hunting sport. Bear witness to Ursa's truculency as she wades heavily in the water of the Salish Sea, waiting for the west coast brawl to commence. Ursa's tracking the patriarchal trophy; the hunted has become the hunter.

MEDOUCHEA ~ After being victim-blamed for a series of sexual assaults over a lifetime in the underworld, Medouchea has one goal and one goal only: the eternal quest for revenge on all douchebaggery. Blinded by bitterness, her wrath extends basically to anything that moves. Womanizers of the world beware – she’s got extra-special loathing for your type and legend has it her douche will immobilize you. She’s a true villain. Every ounce of goodness has been rinsed right out of her. Now this one’s thirsty for death squadding.

PANDORA DEATH BOX ~ Pandora Death Box has finally escaped the domesticated sphere of her crabby Scottish husband. Returning to the sacred muir as her old Selkie sea witch self, Pandora Death Box is on a mission to reclaim the many sealskins of her lost sisters despite the claustrophobic restrictions of patriarchy and its many prescribed boxes. Awaiting her prey in beds of bull kelp, she watches for any crusty oppressor creeping the shoreline. Fuelled by her Selkie ancestors, Pandora Death Box uses her transformative power to shapeshift and her deep emotional rage to mobilize oceanic whirlpools of DOOM. Tangling her opponents into Celtic knots of fury and blissfully whipping their booties, she attempts to release the sheer evil out of any unwelcome visitor. Watch out for her seaweed and crude oil upchuck when she barks. The aroma is foul and toxic...

SHAYENA ~ Born from a long dominant matriarchal lineage, Shyena grew up in the dusty trails of a merciless savana. Female spotted hyenas are not like other hyenas, they're dominance over males grew them a pseudo-penis to show their supremacy. Being the largest and strongest of her species with a bear-like built she is bloodthirsty and on the hunt for her next prey at any given time, licking her fangs at the sight of any warmblooded critter that dares enter her territory. Dryhumping males facefront and viciously attacking her female subordinates, to remind them of her dominance, is common nature. Recently captured by a safari game hunter The backwoods breeder she is now chained and can't contained her wild instinct to kill.

CROTCH LIGHT ~ From the land of sparkle clits and snail trails, Crotchlight is the inner essence that every strong broad is capable of. Once tapped into, Crotchlight releases her signature moves, the labia smack and her blinding death beam of lazer light current originating from her crotch.

MACHO HAM ~ A hangry, hustlin’, heartbreakin’ hater, Macho Ham is there to put the hurt on and give you a hard on. This haggard hambone is macho as rock - and won’t let you forget it. Hamming it up hard and slamming it down harder. Macho Ham can handle herself in the ring, but you should see her handle a pair of Bacon Titz - Come on out Bacon Bitties, show us your tithes! With spit in her eye and fire in her teeth, Macho Ham will show you who’s the man. This ‘aint honey-glazed ham - it’s wrestling.

The VELVET RUT RUMBLE takes place on the unceded territories of the Lekwungen peoples at the Victoria Edelweiss Club Hall (108 Niagara Street, Victoria, BC).

DON'T BE LATE! Doors open at 7pm, and the show starts at 8pm SHARP. Trust us, you don't want to miss the first match!

♥ We welcome humans of all ages! However, if you are bringing your little ones, please be warned of the mature content, inlcuding graphic violence, references to sex, bodily fluids, and contemporary gender politics. If you are able to discuss these issues with your child so that they may understand that this is about a relocation of power and equality, not about perpetuating violence and domination, we welcome and salute you and your family!
♥ Parking is available, however limited! If you plan to drive, please carpool and plan to have a designated driver.
♥ Bus# 31 will take you from downtown along Douglas Road to Dallas Road - your stop is Niagara street!
♥ Seating is limited - please give priority to folks who need it!
♥ The event will take place on the main floor of the building, which is wheelchair accessible.
♥ There is no ATM at the Victoria Edelweiss Club Hall, so BE SURE TO BRING CA$H! The West Coast League Of Lady Wrestlers will also be able to accept credit card payments through Square for league merchandise and drink tickets.
♥ The VELVET RUT RUMBLE is a fully licensed event - no outside alcohol is permitted within the building.
♥ Security and Level 3 First Aid attendants will be on hand at all times to provide any necessary assistance.

♥♥♥ ! and most importantly ! ♥♥♥
The WCLOLW ring is an inclusive, body-positive, trans* and queer-friendly space. Haters - need not attend!
We encourage the creation of handmade signs, fan-art, chants and costumes when they are in the spirit of inclusion and good times.
♥♥♥

Herstorically, all League Of Lady Wrestlers events have been sold-out shows. Tickets can be purchased in advance in the following ways:


We can't wait to see you there!
XOXO,
WCLOLW